How are you doing today ?
Because i really enjoyed writing an article completely in english last week, and also because you seemed loving it, i decided today to do it again :) And for you pleasure it is not with one word this week but too. As you know it, last week i was sick so i didn t really feel like going on the computer. I felt bad to leave you a week without articles so this week i really want to make it up to you ... So this is the two words : Enjoyyyyyyyyyyyyyyyyyyy !

The first word is : Baguette :)
Of course you know what that this is, and so did i when i first arrived in France. What i didn't know was that you don't have to buy the whole thing. Buying a whole baguette and then not eating all of it in the course of the day, use to annoy me intensely because the bread gets stale by the next morning. Until the day when i heard someone ask for "une demie baguette" at my local boulangerie. Half a baguette was handed over without a raised eyebrow. Indeed, i now realize that quite a few people, especially single people, reguraly only buy half. You can even buy two halves in the course of one day and thus enjoy fresh bread both for breackfast and in the evening. There is more experts who particulary like a crusty or a less crusty baguette go on to request a baguelle that is "bien cuite" (well done) or "pas trop cuite" (not too crusty). Another unexpected variant is offered by calling for somerthing called "une bagette moulée". This is a loaf that has been baked in a shaped baking tray, rather than on a flat plate, and thus has a lower half that is softer and less crusty. All this should enable to broaden your bread-buying horizons enormously.

My Opinion :
I think this is a good description of a baguette, but they forgot to mention in it that lot of people generally are buying 2 baguettes. One for lunch or diner or breackfast and one to eat right away, on the way back home for exemple.  I love baguette and i miss buying them so much. I found a place where i can find a baguette with the "same" flavors than the one in France, but it's really expensive ...

And you ? How Many baguettes ? 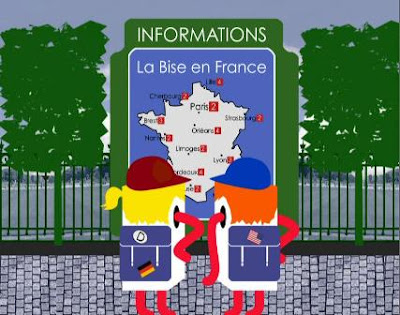 The second word is : Bise :)
La Bise is the act of kissing someone on both cheeks, generally twice but sometimes four times, and even more rarely, three times. Mastering it is more difficult than it looks. As in kissing someone's hand,where you don't actually kiss it, kissing someone's cheek involves putting your cheeks to hers and making a kissing sound rather than actually smacking your lips into her cheek. Clearly, two people can't kiss each other's cheeks at the same time as the angles don't work. Practice it in the privacy of your own homes before letting yourself loose on your first victim, bearing in mind that it is vitally important to keep your lips away from theirs. Once you have mastered the act of kissing, you have to decide what sort of kisser you are going to be. There are people who kiss twice, some who kiss three times and the rest who kiss four times. There are also selfclaimed experts who will talk at lenght on what sort of person will kiss a given number of times, and there are even people who try to dray parallels between particular regions of France and the number of kisses given. Such people will even quote particular villages deep in rural France (of which there is an awful lot) where all the inhabitants give a single bise. Experience has taught me to be extremely skeptical of all this. As far as i can see, you can never tell what sort of person you may be confronted with. Finally, there are even differences in the sounds poeple make during "la bise". These can range from near silence to extraordinarily loud smacking sounds made from the opposite corner of one's mouth to the other person's cheek.

My Opinion :
Where i come from (Ille et Vilaine, Bretagne) people do four kiss. All the time i went to Paris i had the impression they are doing only two. Since i'm with my husband, that happenned that with few member of his family or in our friends circles, or even with my host family, we do a mix between " la bise " and hugging. So it can be a little weird at first, but i like it :)

What about you guys ? How many Kiss are you doing during "la bise" ????

See you next week for another word :)